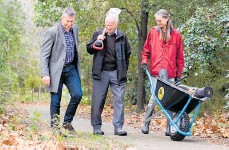 Abrand-new hospice for Hawke’s Bay is getting closer to reality with fundraising efforts nosing past the $13 million mark. The total cost for a muchneeded new home for Cranford Hospice is estimated at $15 million, and will be built on a large site between Napier and Hastings. If all goes well it could be opened by the end of 2024. A big push to raise the final $2 million began on Friday during a cocktail event. The foundation behind the project said it would love to raise the remaining funds by Christmas. “This is our largest, most vital fundraising ask to date,” Cranford Hospice CEO Janice Byford-Jones said. “We’re 90 per cent of the way there and now need our community to get behind us in any way they can, to help build a hub for palliative care services for generations to come.” Cranford Hospice has plans to build its new home on a donated 5.8ha site in Chesterhope Rd in Pakowhai between Napier and Hastings. The long-running hospice is based in dated premises in Knight St in Hastings. The new facility will include up to 10 bedrooms — all with ensuites — plus a community care centre and plenty of space for the nursing team, which cares for up to 200 people on any given day, mainly in the community. Byford-Jones said it was forecast by 2025 the hospice would need to care for hundreds more people each year in Hawke’s Bay, and a new facility was vital to help support the work. “We’re already feeling the effect of this demand for our services by patients both young and old. Our need is urgent.” The large site that will be the new home of the hospice was generously donated by the Joan Fernie Charitable Trust. It features tranquil gardens for patients and their whānau to enjoy. The public will be invited to visit the grounds during two open days as part of the fundraising push on dates yet to be announced. Cranford Hospice Foundation chairman Chris Tremain said the hospice relied heavily on donations for its day-to-day operation. He said the foundation was blown away by the generosity of the Hawke’s Bay community getting behind the hospice, including this push to raise $15m for a new home. “We are really humbled with what the Hawke’s Bay community has come up with so far and are confident that we can achieve the target needed to build the new hospice.” Designs are being finalised, with a building consent application to be submitted soon.