Waih¯ı riders weren’t there to horse around

Asmall equestrian team from Waih¯ı College is now among the top 10 secondary school teams in the North Island. Four girls from Waih¯ı College Equestrian team took part in the North Island Secondary Schools Horse Trials in Taupo¯ last weekend — not expecting much — and came home placed ninth out of 36 teams. “That is huge,” says co-manager Allison Mathers. “Our girls have never ever been to anything like that this before. It’s always a rider’s dream to be part of these events. We decided to have a go and take it all in . . . there was no way we thought we’d come home with a placing.” The two-day event put the girls (and their horses) through their paces in dressage, showjumping and cross country. At the end of the first day the girls were coming 12th in dressage and most had personal best scores. Showjumping saw clear rounds for all. Sunday was cross country and the team’s collective scores over the weekend gave them their ninth placing. They also received the team spirit award. The team was Emma Knight, 15, Daisy Burgess, 13, Summah Mathers, 13, and Evah Carey, 13 (with coach Bethany Sharfe of Synergy Equestrian). Allison says they were one of smallest schools there as well as being a very young team. 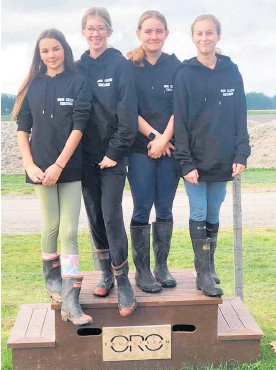