Step away from me: Tricks to protecting your personal space 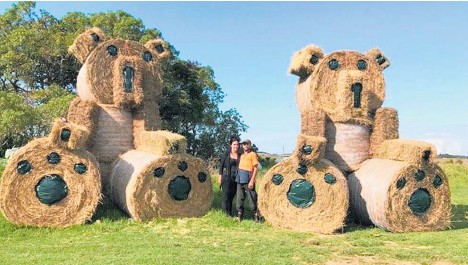 The Buchanan clan’s Family Lockdown Boogie, teddy bears in windows and on social media, and the Holderness family’s Covid parodies. These creations definitely made lockdowns more bearable for me. But what struck me the most was a video of kids at a school in China with these propeller-like hats to help them maintain physical distancing. In a similar vein, a cafe´ in Germany gave customers straw hats with two swimming noodles attached to the top. As my social media feed is full of friends and acquaintances on the other side of the world, tanned as teddy bears, and New Zealand has now fully opened its borders, my mind keeps going back to these physical distancing devices. Why? I guess because these happenings remind me of crowds. What do you reckon about me rocking a noodle hat around The Plaza or Downtown? It could come with flashing lights and beeping sounds. “Beware! Woman who likes her personal space is in the building.” Though, perhaps body odour, having my knickers tucked in my skirt or wearing my bra over my T-shirt will do the trick. When I was at Mont-Saint-Michel Abbey in France about a decade ago, a woman behind me thought the queue would move faster if she stood so close to me that our bodies were touching. Without turning around, I suddenly developed a lean to rival the Tower of Pisa and rocked back on my heels. It seemed to do the trick. It wasn’t until I got back to the hotel I noticed my beloved backpack had all these pulls in it. All I could figure was she’d used some sharp instrument to make her point. Whenever I used that backpack I was reminded of my attempt to claim some personal space. The pandemic has thrown not just personal space into the spotlight, but etiquette in general when out in public. I was stunned to watch an elderly man in an upmarket cafe´ on Monday cough into his vertical closed fist, which was some distance from his mouth. I still haven’t quite got over the day I was sitting in a nearby cafe´ , minding my own business, when a bottom appeared so close to my table I could have touched it. Its owner appeared oblivious to the fact his derrie` re was almost in my hot drink. Talking about chocolate, it’s more than a quarter of a century since I had this stark lesson in how people react to appearances, but I can close my eyes and see it all unfolding again. I’d finally got a full-time job after finishing university, and treated myself to a full-length coat. It wasn’t that posh, but certainly a step up from unemployed garb. I was in one of those freshly baked cookie shops that were all the rage in the mid-1990s. It would entice customers in with the baking smells but then subject them to haphazard customer service. It didn’t seem to believe in queues, just people milling. It made it so hard for the staff to know who was next. But, boom, the day I wore my new navy coat I was the next to be served, even though I knew there were customers who had arrived before me. Clothes maketh the served sugar junkie. Then there’s people who walk in a door and stop, those who are scoffing from the buffet while blocking everyone else’s access, and those who wouldn’t know a line if it was tattooed on their arm. With my pool noodle hat, I could prod those who are oblivious to the needs of those behind them, grab six slices of fresh pineapple without moving a muscle, and turn two noodles into electric fences. If you are still reading, stop. Head to your nearest pool noodle shop, as there will be a run on these nifty devices. I guarantee it.