Ka¯ piti songstress back in the groove

After a Covid hiatus, Ella Monnery is again doing what she loves 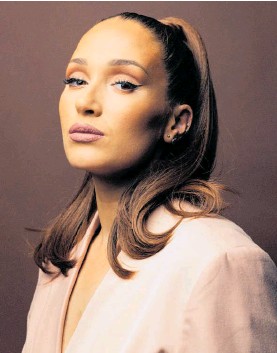 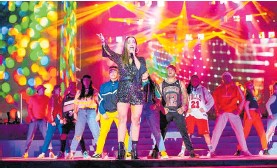 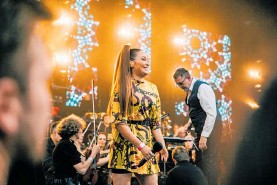 Named after the Queen of Jazz, Ella Fitzgerald, it was only right that Ella Monnery would end up on a stage. With her parents cranking soulful jazz and RnB along with healthy portions of Michael Jackson and Whitney Houston, Ella’s music taste developed from a young age into a love of “old school funky, groovy music”. Now, at just 25, Ella’s rich, soulful vocals along and energetic stage presence have made her a powerhouse on the New Zealand music scene. “My parents were always listening to music and had it playing around the house when I was growing up. “They were into soul, jazz, disco, RnB — anything like that. “We listened to a lot of Michael Jackson and Aretha Franklin and Whitney Houston, who is now one of my biggest inspirations.” Never afraid to be the centre of attention, Ella loved watching The Wiggles and Hi-5 — anything she could sing and dance to. “I would sing and dance along to the music from a young age and was signed up for dance classes from the age of 6 for a bit of a laugh. “I loved being the centre of attention. “I loved being on the stage and would always be asking, ‘Does anyone want to hear a song, does anyone want to see me dance?’ taking any chance I could get to perform.” Growing up in Waikanae Beach, Ella loved the small-town vibe. “Literally my whole childhood was in Waikanae. “It was all you could ever want. We had the river, the beach, the dairy, the fish and chip shop and skate park — that’s all you needed. “It was such an awesome childhood, living in a small town where everyone knows everyone. “My whole life was in Waikanae until I was told we were moving to the city.” Distraught at the idea, it was the promise of getting a television in her bedroom that convinced Ella to move from her beloved Waikanae Beach to Wellington city. Moving to a new school, Ella continued with lessons, doing talent shows and performances here and there, but still not taking it too seriously. But when she started being offered more solos and being picked for showcases, Ella and her family started to realise there was something there. “As I got older it was like ‘hang on you’re actually pretty good at this’ and we started to take it seriously.” When it came time for her to leave school, Ella knew all she wanted to do was sing, but instead she signed up for a business degree at Massey University However, that only lasted two days — Ella returned home on the second day and told her parents she couldn’t do it. She returned home and googled singing schools in Wellington, then signed up for a Bachelor of Applied Arts at Whitireia. Since finishing her degree, Ella has established quite a resume. She has been a regular at Christmas in the Park since 2018, and performed on a cruise ship around Asia for nine months in 2019. Returning home to New Zealand and in her own words “home to real, normal and civilised life”, Ella spent a month at home in Wellington before packing her bags and heading to Auckland in search of performance and collaboration opportunities. Ever since then she has been putting herself out there to get work, meeting different people in the industry before being scouted by The Voice Australia. “Back then when you could get on a plane and travel, when it was easy, they said they’d just put me over for the weekend to hear me sing. “I auditioned and that led to the first time I went on the show before it was disrupted by Covid-19.” Flying over, filming and then coming home in between the rounds, Ella was in New Zealand when Covid19 hit in March 2020 and eventually she had to pull out of the show. However she was able to return to Australia and start from scratch on the show last year. “Looking back, I’m just glad I got to do the show again and do the show when it wasn’t so impacted by Covid19. “It was very surreal going back a second time, more aware of how reality television works. I feel so fulfilled with going back.” Making it all the way through to the semi-finals before being eliminated, Ella has since toured alongside some of Aotearoa’s top musical acts, including P-Money and Sola Rosa. She has also been headlining for Synthony, a musical fusion of electronic dance music, live orchestra, DJs, vocalists and an immersive visual display. “Synthony is hands down my favourite show I’ve ever done. “It’s helped point me in a direction that I really want to go in. “With house music, a lot of the time it samples older disco music so I guess before I did Synthony I never really would have thought about that style.” Living the dream before Covid-19, Ella said, “I was singing, I was travelling, I was getting paid to do what I love and making a living from it, but the past two years have been out of my control. “I just want to get back on to those big stages in New Zealand, like Rhythm and Vines and Homegrown, the biggest and the best in New Zealand and be where all our most well-known acts are.”