Potholes point to need to prepare for future problems 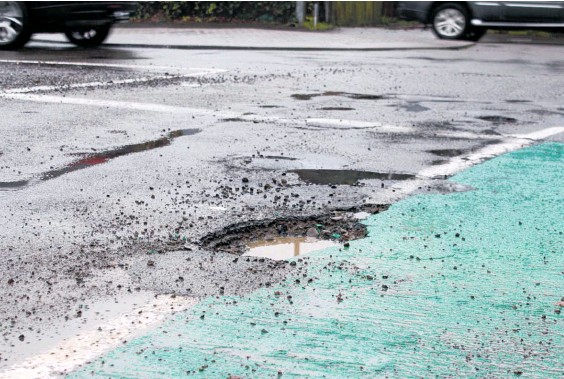 All of us who use local streets have noticed it. As we drive our Fiats down Featherston St and our Toyotas on Tremaine Ave we are constantly swerving to avoid dropping the front wheel into the ever-increasing number of potholes that are opening up like a teenager’s first rash of pimples. The craters full of water at night are the worst and, as we hit them at 50km/h, the first thing that comes to our minds is abuse of the city council. It’s their job to maintain our street so why aren’t they doing it? Who is going to pay for the wornout front shock, or even my physio bill from the pain of the constant rattle going through my spine? As a part-time motorcyclist it’s even worse. Hitting a pothole unexpectedly at 50km/h is serious; at 80 it’s deadly. This situation was predicted by the AA in 2010 when a law change allowed bigger trucks on our roads. The consequences were expected and debated yet not fully addressed. The government of the day decided bigger trucks were better for the economy and the increased revenue would be good for us all (they were probably right). They were even so generous as to offer to pay 50 per cent of the cost of the maintenance of the increased wear and tear these new 53-tonne behemoths would cause to our treelined streets and avenues. That still leaves us, the ratepayers, with 50 per cent of the cost of filling in those potholes and actually rebuilding our roads to handle the extra strain. The law change was 12 years ago and it’s a credit to our road builders that our roads have lasted as well as they have, until now. The city council and other local authorities have been under fire recently for this pothole pandemic and they have fought back with facts and figures of the number of potholes their contractors have fixed and also the excuse that it’s been an unusually wet winter. I’m wondering if our council could have done more planning in the past decade to prevent this situation from happening in the first place. Playing the blame game is fair enough. In this case it’s the Government that made the new laws and the councils that did not plan for the consequences, but it’s now time to move on and start playing the planning game instead. We need a plan to get us out of this situation and the many issues such as climate change, global pandemics, wars, tired infrastructure and myriad unforeseen problems that are going to confront us for the rest of this decade and beyond.