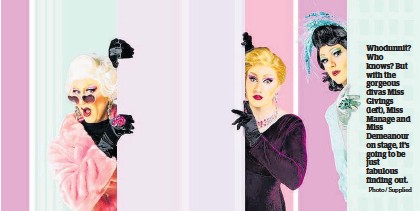 The drama will be as high as the heels when the Les Femmes drag queens come to town this month. The talented trio haven’t performed in Palmerston North before, and say they are looking forward to bringing their show to the region. Drop Dead Gorgeous! A Drag Murder Miss-tery is a murder mystery with a difference. Well, several differences actually, including the fact each of the three performances will be slightly different to the other. This is because each show will feature a different “guest detective” on stage tasked with solving the murder mystery. The murder takes place at a Miss Mature Tween Queen pageant, in which the queens of Les Femmes, Miss Manage, Miss Demeanour and Miss Givings are competing. “We are pretty safe because we have all the parts of the show around the pageant which are rehearsed and scripted.” Jeremy Hinman (Miss Manage) says while the queens are “safe” when it comes to knowing the script, that’s not the case for the guest actors joining them for the Palmy season. “Each night we are joined by a guest actor, a different one each night, and they are the detective who has to solve the murder.” “They get the first page of the script basically, so they know their first entrance and first few lines,” adds Olly Humphries (Miss Givings). Those few lines translate to just about two minutes of the show, laughs Jared Morello (Miss Demeanour), who says much of the rest of the show is then determined by which case file the audience vote on the detective opening, and how the detective investigates the case. Olly says the show combines the very best of drag — fantastic costumes, lots of humour and outrageous characters, with plenty of great music. “The show features original songs which we worked on with Andy Manning, and that is our point of difference from many other drag acts; we don’t lip synch, the three of us are all trained in musical theatre, so we sing the songs ourselves, which is a bit different.” Whether audiences have been to drag shows in the past or not, this show provides what Olly terms “an easier touchpoint” for people to experience the unique theatrical art that is drag. “There’s a bit of magic in drag I think, and the show has had great responses from audiences so far.” The pageant theme gives plenty of scope for some fantastic costumes and great comedy, says Jeremy, whose favourite movie “of all time” is Miss Congeniality. With so many fabulous costumes, how long does it take to get ready for the show? About three hours, he says. Some parts of that preparation can’t be rushed, he says — from waiting for wig and eyebrow glue to dry, to not putting on the killer heels too early. “You don’t want to be in a corset or heels longer than needed.” Each of the queens has her own distinct personality, says Jared, and their relationship with each other is like sisters. His alter-ego, Miss Demeanour, could be described as “a camp Pamela Anderson, Pamela but with a bit of class”, he says. Of Miss Givings, Olly says she is undoubtedly “a floozy”. “She’s an absolute bimbo and sexy as hell.” As for Miss Manage, she’s the sassiest of the trio, says Jeremy. “In life as well as on stage actually.”