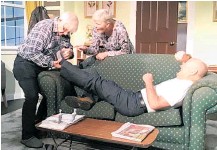 Un-bloody-believable Foxton Little Theatre Written by Joseph Musaphia Directed by Marie Fearon Reviewed by Judith Lacy How many bottles of hand sanitiser do you have in your lounge? Harry and Wynn Booth have three and they are definitely not for decoration. Three years ago, such a question would have seemed bizarre — even if anyone had thought of it. Un-bloody-believable is a new comedy from Wellingtonian Joseph Musaphia, especially for the Covid era. Friday was the world premiere, a notable coup for the community theatre that can and does. Harry and Wynn have been married for nearly 50 years and are in lockdown. It’s not going well and Harry is seeking a cure for boredom. Then Smudge, who may or may not be a relative, arrives with a dodgy jacket and even dodgier bag and does a lot more than popping the Booths’ bubble. The play is a three-hander with nowhere to hide and director Marie Fearon has done a stellar job making sure the cast know their lines inside and out. It’s only her third time in the director’s chair and she’s put much thought into making the house goings-on sound as they should. Foxton Little Theatre stalwart Carl Terry is Harry and he contorts his lived-in face into some memorable expressions. His delivery of the best line in the play was timed to perfection. Terry also handled the physical interactions with Wynn and Smudge well and, thankfully, no blood was spilt. Lynne Long plays Wynn. Her voice was too quiet at the start of the play but she quickly got her delivery up to an audible level and with light and shade. Her exasperated body language was spot on. Lynne’s husband, Bernard Long, plays Smudge and make-up artist Nathan Webb has done an impressive job making Bernard look younger. At times, Smudge’s manic behaviour is bordering on overkill, especially his arm movements that are like the upper limb equivalent of pumping one’s chest, but Bernard’s portrayal of a man in pain was affecting. The play has plenty of laugh-outloud lines but that in itself does not make a great play. It has many of the ingredients needed for comedy gold but the script lacked je ne sais quoi. Yes, I know that is as useful as a mask around someone’s chin. The ending was predictable but how we got there was anything but and at times the plot didn’t quite tie up. But then neither does a pandemic. Foxton is unlike any theatre I’ve ever been to. Director Marie welcomed the audience and did the housekeeping messages, Lynne Long was clearing tables and Terry sat down for a yarn after my table neighbour was keen to know how old Musaphia is. He was born in 1935. Terry also designed and constructed the substantial and wellthought-out set. And what was the first thing I did when I got into the car? Put on hand sanitiser and then my friend and I talked about masks. As we neared my friend’s home and saw something we didn’t like, she quoted a line from the play. Surely, the sign of a memorable night out. If you have been missing live theatre or are keen to give it a go, don a mask and support local. And as Foxton Little Theatre says in its publicity material: “We will save your power bill with heating provided at no extra charge”. Just whatever you do, keep the sanitiser away from the heaters. Un-bloody-believable runs on Fridays and Saturdays until August 13.