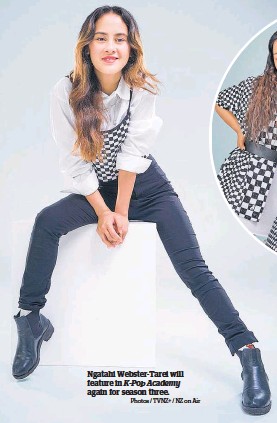 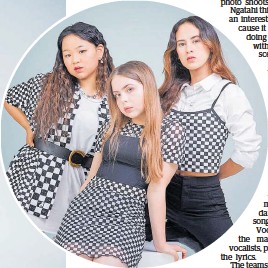 Rotorua teen Teiringatahi Webster-tarei is excited to share what she loves to do most on another season of K-pop Academy, and to bring some trilingual flair to her performance. Ngatahi, who featured in season two of the television series K-pop Academy, has made it back into season three against plenty of fierce competition. In this season, Ngatahi and K-pop Academy vocal coach Turanga Merito helped create a trilingual K-pop song in Korean, English and te reo Māori, in which Ngatahi rapped. Ngatahi says the process for getting into season three was the same as the previous one, but she had the advantage of being in season two. Because she could not travel to Auckland due to Covid, a group of those auditioning from other parts of the country had to do so over Zoom, she says. She says it was stressful auditioning online because the connection kept glitching, but she felt great when she found out she had made it onto season three. Ngatahi says highlights of this season for her include recording the song, the battles, and shooting a music video. The trilingual song is called Last Time and is performed by a trio Ngatahi is part of in the show. She says Turanga helped her write her own rap, which included te reo Māori. “It was very different because I’m used to singing one language and now it was three, but it was cool I got to sing some of my lyrics in Māori. “I wanted to show who I was and where I come from.” She says it was also a way to show there are different ethnicities now involved in K-pop, and in K-pop Acad emy’s third season there were people from ethnicities such as Indian, Korean, French, Chinese and Māori. For this season, instead of travelling to Auckland each week for a number of weeks, they crammed all the performances, music videos and photo shoots into two weeks. Ngatahi thinks season three will be an interesting one for viewers because it shows more of the kids doing what they love to do with more behind the scenes footage. In this season, talented youth feature who can who can dance, sing, and rap along with some specialist waackers, poppers and krumpers. New Zealand K-pop queen Rina Chae is back with her talented team of choreographers — David Fung, Heidi Chen, Celina Torres and William Boquiron — using their powerful moves to create seven dances for seven new songs. Vocal coach Turanga does the mahi with the season’s vocalists, preparing them to record the lyrics. The teams take part in a two-week bootcamp preparing their dances, songs and raps to be performance ready. Along the way they undergo styling with stylist Rose Morgan. Each group is taught a make-up look, takes part in a photo shoot, records their vocals in the recording studio and shoots music videos, with the fun culminating in a live performance showing off what all this hard mahi has created. Following on from the K-pop Academy journeys of the first two seasons, it continues to break out to tell the backstories of some of the youth, discovering the source of their inspiration. Rotorua’s Turanga says he joined the Greenstone whānau for season two and three of K-pop Academy as a vocal coach, and that it is an excellent opportunity for our Kiwi youth because it teaches them performance art quality within the K-pop context at the highest level currently possible. He says: “The inspiration behind Ngatahi’s track was the combination of life, love and magic that occurs whenever you merge two or more languages together via the powerful medium that is pop music. “The reality is that K-pop Academy NZ is the first show of its kind — made by Kiwis, for Kiwis — and having worked with Ngatahi before as her dance teacher, it just made sense to ‘politely’ suggest to our producer if it was possible. “She gave us the yes, I wrote it in five minutes, and the rest shall all be revealed via the show.” Turanga says it feels special to have been given this opportunity. He says: “These kids come together for a concentrated amount of time and are put through their paces by us, and every time they rise to the occasion.” He says the two previous seasons means they have been able to iron out the kinks and move forward accordingly in season three. “Rina has been a close friend of mine since we connected in 2015. “She is fire, passion, and love allin-one.” Turanga says it is a pleasure working on the show and that it has never felt like work. Alongside the eight episodes are eight tutorials, where Rina and dancers from each group break down and demonstrate each dance so viewers can learn them at home. In sync with K-pop Academy being released on HEIHEI/TVNZ +, the music tracks will be released on Spotify with additional content released on Tiktok and Instagram. The show will be released on Monday, August 8.